There’s a smartphone that Nokia hasn’t quite got round to announcing as yet, but has on a couple of occasions been leaked, and the device is the Symbian Nokia T7-00, and the smartphone has now posed for a few pictures along with giving up some details.

According to an article over on Engadget by way of Intomobile, PCPop have managed to grab several shots of the China bound device along with some specifications, which is apparently a downgraded version of the Nokia N8.

Specs for the Nokia T7-00 are exactly the same as the Nokia N8 but swaps out the 12 megapixel camera and replaces with an 8 megapixel camera with dual LED flash, the pentaband 3G radio is swapped for TD-SCDMA, and a 700 MHz ARM 11 processor.

The Nokia T7-00 operating system will be Symbian^3, while the screen resolution will be 360 x 640 pixel, the device will also feature Bluetooth, and OpenGL 2.0 for an improved 3D gaming experience.

There’s no word on just when the Nokia T7-00 is likely to be released to the Chinese masses or what price the handset will command or whether Nokia will try to deliver the device elsewhere. 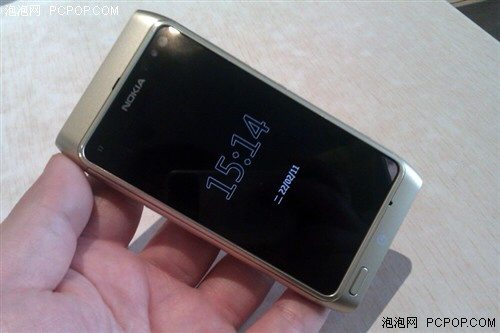