The Google guys are known to enjoy a good prank or two now and then, and apparently the guys played a little prank the other day that took 5 days for anyone to notice apparently, seems people are kind of slow these days.

According to an article over on iPhone Download Blog, and by way of the Google Support Forums, those joking Gogle guys id something to search whereby if an iPhone user typed in the search term “askew” or “Tilt” the search results show a ever so slightly tilted view.

Apparently Google didn’t confine this tilting prank to just the iOS platform either and apparently the same tilt effect works on Android smartphones, I checked it out on my Samsung Galaxy S, and they’re right it is tiled.

Having said that, I’m not too sure just how many iOS and Android users would actually search the terms tilt or askew as I’m sure they don’t become a search requirement for most that often, so was probably the reason discovering the prank took so long.

Just goes to show though that the Google guys do like to play the joker now and again, and for anyone thinking that Android is their biggest joke…think again. 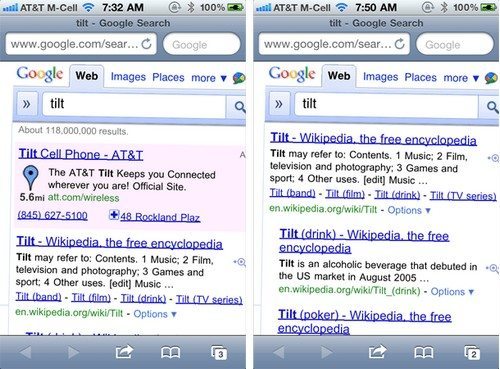