Well now it appears that the Apple iPad 2 can do glasses free 3D by utilising the iOS tablet’s front facing camera to track head and thus deliver a 3D effect, and they have recorded such on a video which naturally we have for your viewing pleasure below.

The video comes our way courtesy of Slash Gear and by way of Mac Stories, and YouTube user DocteurCube, the video last two minutes and shows off the 3D effect on the iOS tablet.

Apparently a couple of researcher at the Laboratory of Informatics at EHCI Research Group, Laurence Nigay and Jeremie Francone accomplished the glasses free 3D effect by tracking head movement via the iPad front facing camera.

Here’s what the guys say…” We track the head of the user with the front facing camera in order to create a glasses-free monocular 3D display. Such spatially-aware mobile display enables to improve the possibilities of interaction. It does not use the accelerometers and relies only on the front camera.”

All very technical indeed so the best way to let you know about it is to just let you head on down and hit that play button and check out just how well this glasses free 3D effect works on the Apple iPad 2…enjoy. 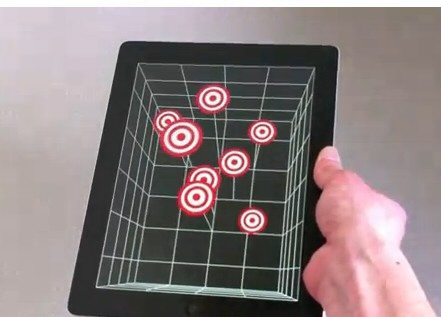 7 thoughts on “Apple iPad 2 Can Do Glasses Free 3D: Video”