If you have been wondering, just what Motorola have been up to recently, we may have the answer. It would appear that they might have been possibly designing a new rugged Android tablet.

A slide of what appears to be a new Motorola Android tablet has somehow found its way onto to the web, but on this occasion, it would appear from the slide the tablet might be more enterprise-oriented.

According to the slide, which was brought to our attention by CrunchGear via Ubergizmo the tablet will come with some great specs, like a 7â€³ display, OMAP4 dual-core 1GHz processor, 1GH of RAM, and the not expected Android 2.3. It also features an 8-megapixel rear camera, 1.3-megapixel front camera and is Bluetooth & WiFi enabled.

The tablet which has yet to be named, also comes with some interesting features that will separate it from the other tablets out there, such as enterprise software, stylus support, signature capture, USB connectivity for accessories and has a removable Smart Li-Ion battery. It is also expected to be built to withstanding 4â€² drops to plywood, IP54 sealed and have the ability to still function in temperatures reaching 50 degrees Celsius. 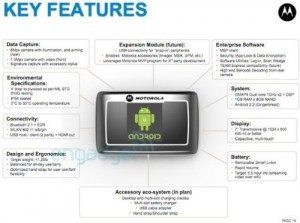 Now, it is not know whether this is an old slide, that has been put about to get tongues wagging or could it be a case of Motorola trying to bring something different to the table, after what appears to be a flop for the Motorola Xoom in the US.

Also, if this tablet is ever launched will it be released all over the world, as in the case of the Motorla Xoom which is expected to release in Australia sometime very soon via Telstra. Do you like the specs shown on the slide? What specs would you like to see? Let us know.