Give someone in the retail business access to photoshop and mistakes are bound to happen. For example are you aware that the first tablet out of the Research In Motion camp runs Android 3.0 Honeycomb? No, neither did we.

However according to an article over on Ubergizmo and by way of Nexus404, it appears that retailer MacMall seems to be under the assumption that the BlackBerry PlayBook does indeed run Android 3.0 Honeycomb rather than RIM’s QNX operating system.

Apparently MacMall slapped up an advert for the BlackBerry PlayBook and mistakenly photoshopping Android Honeycomb onto the BlackBerry tablet, and apparently were in no real hurry to take it down.

Most are aware that the BlackBerry PlayBook can run Android apps via an type of emulator, but that isn’t the save as running Android natively. Perhaps whoever made the image is a devoted Android fan with a great deal of wishful thinking.

Would anyone love to see the BlackBerry PlayBook be able to run Android 3.0 Honeycomb? Perhaps that would make the RIM tablet more acceptable to consumers. 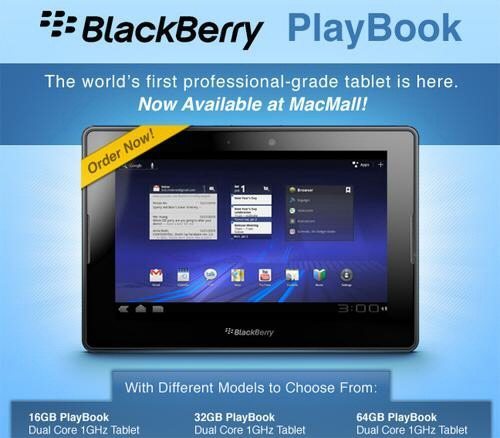 One thought on “Android 3.0 Honeycomb On BlackBerry PlayBook Mistake by MacMall”