iOS Losing Out To Android In Smartphone Desirability

If you are of the opinion that more people over in US prefer Apple’s iOS over Android you could be forgiven for believing so up until now that is, as apparently when it comes to smartphone desirability the Android platform is now ahead of iOS.

According to the guys over at the Boy Genius Report, the latest survey by Nielsen, back in June and September of 2010, when respondents were asked which smartphone platform they intend to purchase, 33 percent said iOS, 26 percent said Android while 13 percent said BlackBerry.

But now that platform desirability has changed slightly with Nielsen figures showing that when asked the same question between January and March this year Android pulled in 31 percent, while the iPhone garnered 30 percent and BlackBerry managed 11 percent.

Furthermore half of the people surveyed in March this year who said they had brought a smartphone in the last 6 months say they opted to go with Android, a quarter had purchased the iPhone and 15 percent had chosen a BlackBerry handset.

Sp if the figures are anything to go by it would appear that Android is more desirable than iOS albeit only slightly, agree or disagree? 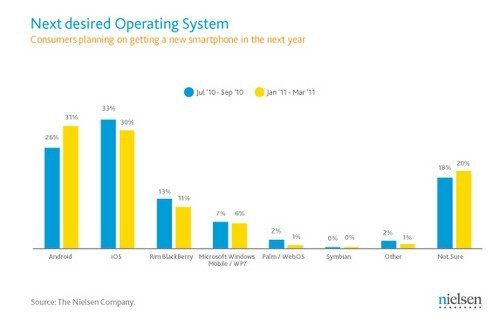 2 thoughts on “iOS Losing Out To Android In Smartphone Desirability”