For all those BlackBerry faithful out there waiting to see what the latest handset to come out from RIM will look like, will be pleased to know that we have the first impression details of the BlackBerry Bold Touch 9900.

Although the smartphone is not finished yet, it was unveiled at the BlackBerry World 2011. According to Kyle McInnes of BlackBerryCool the thing that everyone at the event seemed to love about this phone was the “Liquid Graphics”. This is a marketing term used by RIM to describe the Java code and pixel density behind the homescreen and OS.

Kyle goes on to say that he believes the homescreen is running at 60fps (frames per second), which makes switching screens from icon to app an elegant process and scrolling between app screens incredibly smooth. Another major feature of the handset to stand out is the touchscreen interface; a number of sceptics thought the screen on the Bold Touch would be too small to accommodate this feature. However, it would appear that they were wrong, as this is a great new feature especially for navigating the homescreen. 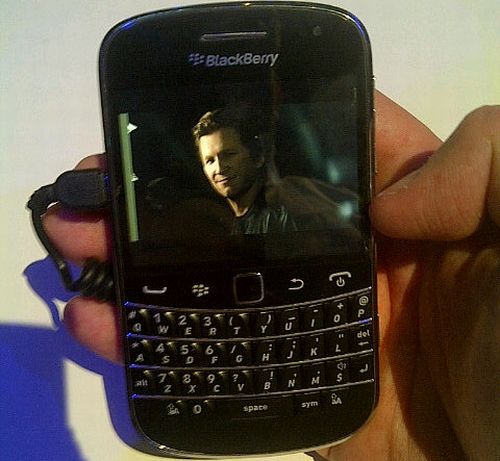 The pinch to zoom on the browser was unable to be tested, as it was still in beta. The touch controls of the BlackBerry Bold Touch 9900 will save the user a lot of time when clicking on an icon rather than having to use the trackpad to navigate to it.

Here is a breakdown of the input methods: with touchscreen gestures, the navigation of the homescreen tabs is easier. For precision, the trackpad is perfect especially when navigating text to make an edit, or copying and pasting. The keyboard on the Bold Touch 9900 is ideal for when the user wants to bang out emails.

The Bold Touch is very light in weight and has a clean metallic finish around the edges, with a glass battery door that has carbon fibre underneath. However, it is important to note that this handset could be different when it is finally released. One thing that Kyle does say he is sceptical about is the ability of OS 7 to address certain fundamental issues, including the booting up of the device, which takes too long, the freezing up of the device when loading and deleting apps, and the lack of any new hardware features (such as front facing camera).

Please let us know if you are interested in this BlackBerry device when it is finally released and what features you will be hoping to see.