We have a preview video of a device for your consideration below that according to Queen’s University’s Roel Vertegaal, the “thinfilm phone will make current smartphone obsolete in 5 to 10 years.” The smartphone prototype is called PaperPhone and apparently is best described as “a flexible iPhone.”

According to Human Media Lab, the PaperPhone is the world’s first interactive paper computer an does everything a smartphone can such as make phone calls, play music, and stores books.

The PaperPhone features a 9.5cm display formed of a thin flexible film e-ink display and the flexibility apparently makes it much more portable than any current mobile computer.

Roel Vertegaal, the creator says… “This is the future. everything is going to look and feel like this within five years. This computer looks, feels and operates like a small sheet of interactive paper. you interact with it by bending it into a cell phone, flipping the corner to turn pages, or writing on it with a pen.”

Rather than me try to explain all the tech jargon here it’s probably best if you jump right on down and hit the play button to check out this new PaperPhone flexible display for smartphone and tablets in action and feel free to let us know what you think. 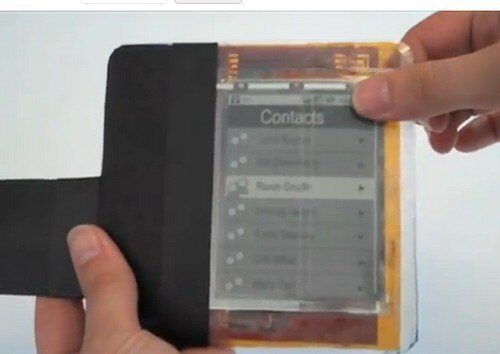 One thought on “PaperPhone, a Flexible iPhone: Video”