Google I/O 2011 begun Yesterday and during the event the latest Android 3.0 Honeycomb tablet out of the Samsung camp was on show for those wishing to touch, the Samsung Galaxy Tab 10.1, which my colleague Mark earlier reported the confirmation of a June the 8th release date.

While at Google I/O the guys over at Slash Gear managed to get some playtime with the Samsung galaxy tab 10.1 tablet and recorded the occasion on video, which of course we have for your viewing pleasure below.

The guys say that the Samsung Galaxy Tab 10.1 trumps the Apple iPad 2 when it comes to thinness coming in at just 8.6mm with a weight of 595 grams and sports a 1 GHz dual-core processor, WiFi, Bluetooth and HSPA+ network speeds.

Apparently the tablet shown is running stock Android 3.0 Honeycomb but will launch with TouchWiz UX, so I’ll leave it right there as not to spoil any of your viewing enjoyment so all you need to do now is hit that play button and enjoy.

Are any of our readers anticipating snapping up the Samsung Galaxy tab 10.1 as of June the 8th? If so feel free to let us know by dropping us a comment. 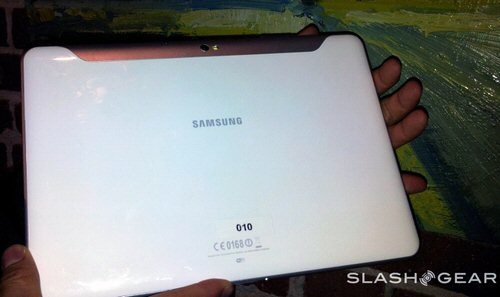