The word is old Sammy is gearing up to showcase a new 10.1-inch WQXGA display for tablets at SID Display Week 2011 International Symposium next week that will be almost have Retina like pixel density.

According to Apple Insider by way of TUAW, this new Samsung 10.1-inch display has a 2560 x 1600 resolution at 300 dpi and apparently “compares favourably to the Retina Display.”

The senior vide president of Samsung Electronics, Dr. Sungtae Shin says, “Samsung’s PenTile display technology is the only display technology that operates at 40 percent less power yet provides twice that of Full HD-viewing performance for consumers compared to legacy RGB stripe LCDs. There is no other commercial display technology on the market today that offers this high of a resolution and pixel density in a 10.1-inch size display.”

Apparently it is unlikely though that Apple would choose Samsung’s new display for their Apple iPad 3 as the resolution is in excess of the pixel-double resolution of 1024 x 768 currently on the iOS tablets and the form factor of 10.1-inch is more than the 9.7-inch Apple iPad design.

As for when the new display may appear on Samsung Galaxy tabs, Samsung hasn’t indicated a date just yet. 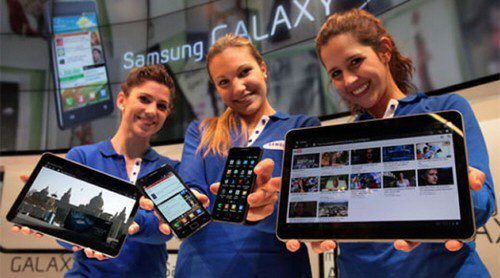