More possible rumours on Apple’s latest operating system today, with the assumption that a Speech to Text conversion feature may find its way into iOS 5 due to the discovery of a new Apple patent that delivers more voice integration possibilities.

According to the iPhone Download Blog the guys over at Patently Apple have come up with the new patent, which suggests that Apple could be looking at a text to speech/speech to text converter for the iOS smartphone.

Here’s what the Patently Apple article says… “According to a new Apple patent application that was published this morning by the US Patent and Trademark Office, future iPhone’s are likely to provide end users with effective new ways of communicating in both noisy environments like a restaurant or even during a quiet office meeting without stirring a mouse. The system involves using new text-to-speech and speech-to-text converters as well as providing a means of sending prerecorded notifications to the caller if you’re unable to speak when answering your phone.”

Although it has to be said not many of these Apple patents make it to reality. But what do our iPhone toting reader’s think about this new patented, would you like to see text to speech and speech to text delivered by Apple? 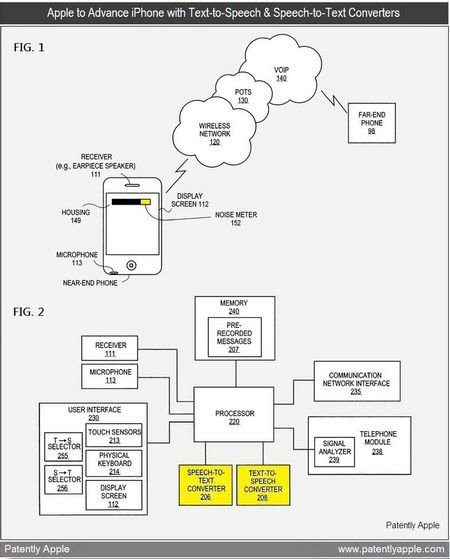