According to an article over on Cult of Mac by way of Tech Goblin, a report claims that a report sourced via a user that recently spoke to an AT&T representative concerning signing up for the new iOS smartphone the rep apparently said that AT&T is telling staff the iPhone 5 has been delayed until October due to the “white iPhone 4.”

This latest rumour broke when Twitter user @halolordkiller3 tweeted this conversation…” Me “It’s a shame that the iPhone 5 won’t come out till September now. I was hoping to get one because other rumors said that it may support Sprint and T-Mobile.”

AT&T Employee “Actually I just got back from a cooperate meeting discussing the new iPhone 5. They said it won’t be put in stores till October now due to the White iPhone 4. Apple wants as many sales as possible.”

Me “That’s a shame. I heard it was also suppose to be just one phone. Like it could work on AT&T Verizon etc.”

AT&T Employee “That wasn’t discussed at the meeting. I can’t really see Apple doing that yet until the next iPhone after 5 when 4g will be on it.”

So if this is true it appears that the iPhone 5 wont make an appearance on AT&T at least until October and also as suspected and previously reported the iPhone 5 wont have 4G compatibility, but then we all knew that didn’t we. 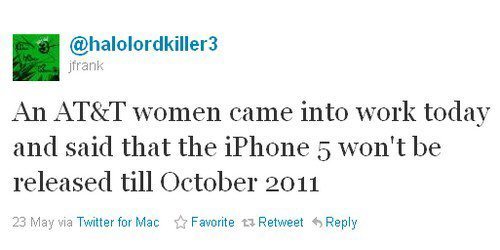