According to an article over on Engadget, O2 UK has both the white and black versions of the Android 2.3 Gingerbread device in stock and pricing for both colours is the same, with the Xperia Play being offered as a free handset for Â£34 a month on a 2-year term.

If you prefer to go the prepay route the Sony Ericsson Xperia Play will set you back a hefty Â£430, but you do receive a multimedia dock along with 3 games to play on the device.

If you are after the Xperia Play, O2 UK has exclusivity over the handset, so you need to go with them for now. As for why the Xperia Play has been released earlier than expected, one can probably put it down to the Android 2.3.3 Gingerbread update being rolled out.

So are any of our UK readers hoping to snap up the Sony Ericsson Xperia Play in white or black to get some PlayStation gaming on the move? 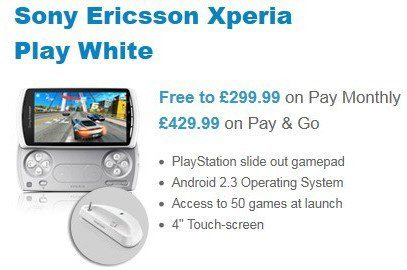