Some time back Steve Wozniak showed off his white iPhone 4 when the pale version of the iOS smartphone wasn’t available. Steve fessed up it was a DIY version and stated he got the white parts from a New York kid called Fei Lam, Lam apparently scooped $130,000 thought selling white front and back plates for the iPhone 4, and apparently Apple want that cash as they have now sued Lam.

According to the guys over on 9to5 Mac by way of Macrumors, Apple has now files a suit against Lam and his parents who apparently “aided and abetted him,” and are after damages along with all profits Lam made from selling on the white iPhone 4 parts.

However apparently Apple also files a voluntary dismissal without prejudice, which could mean an agreement has already been reached, but that without prejudice means Apple can re-file is they wish in the future.

The filing also included the identity of the guy who sold Lam the iPhone 4 parts, a business owner in Shenzhen called Alan Yang. As for the outcome of the lawsuit and dismissal there’s no word on what possible agreement Apple and Lam came to. 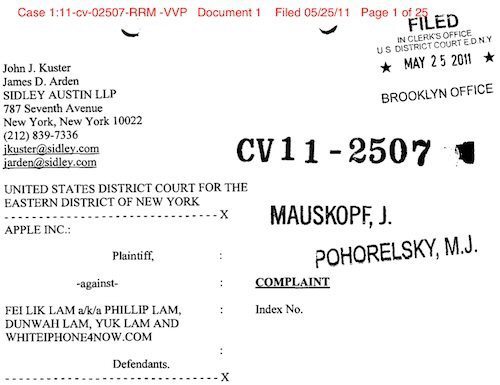