Asus has now gone all official and unveiled a new Android device that features a tablet that has a dock for a smartphone and is called the Asus Padfone, blending smartphone and tablet together as one, and we have an unveiling video along with a fist look hands-on video below for your viewing pleasure.

Both the Asus Padfone videos come our way courtesy of the guys over at Engadget, with the unveiling footage also curtsey of Netbook News with the unveiling lasting almost two minutes and the Engadget hands-on delivering almost four minutes of checking out a mockup of the Android device.

Apparently Asus have big plans for the Asus Padfone, and is looking at Christmas to bringing the device to the market, a device that will apparently come packing the latest Android operating system, Ice Cream Sandwich.

Apparently Benson Lin of Asus didn’t actually say the Padfone will have Ice Cream Sandwich, but he does point of that you can’t have an Android smartphone running Android Honeycomb, so basically put two and tow together and Bob’s your uncle.

Anyway head on down, and hit those play buttons to check out the next Android tablet and smartphone duo coming from Asus…enjoy.

UPDATE: The Asus PadFone will be unveiled at MWC 2012, for more information please read here. 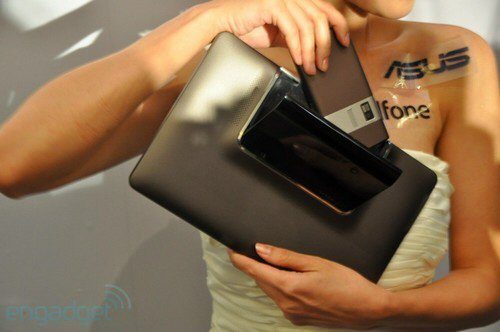