Looks like this year is going to be very good indeed for the new Asus PadFone, official news says that it will be unveiled at MWC 2012 February 27th. This could possibly be the device of the year if Tegra 3 and Qualcomm Snapdragon S4 MSM8960 chip are really on board.

Things will be a little busy at the Asus booth this year at the upcoming Mobile World Congress event, and the Asus PadFone will have many eyes looking upon it. Expected features will include Android Ice Cream Sandwich and Tegra 3, and if this is the case we can see customers considering changing their Android phones they already own, such as the Galaxy Nexus or even the Samsung Galaxy S2, would you?

The Asus PadFone in our eyes is an innovative beauty, bringing customers to the world of hybrid; a phone and tablet all-in-one device is a right winner if specs proceed to be true. Having Tegra 3 and ICS 4.0 puts this right on par with the Transformer Prime, so thumbs up there.

This is very exciting and can see this convergence gadget doing very well indeed on the sales front, if you love both smartphone and tablet then the PadFone may just win your heart. 3G-network connection is shared between the pad and phone.

Main features include: The ability to enlarge the screen whenever you please, transition of applications between pad and phone, takes only one SIM card for both devices, no more data transfer problems thanks to the single storage pool, the pad can be used as an extended battery to charge your phone, and video conferencing at its best is within.

Stay with us because we will let you know more news covering the Asus PadFone launch at MWC 2012.

Just a quick question whilst you wait for more news, would you consider selling your current Android phone for the Asus PadFone? 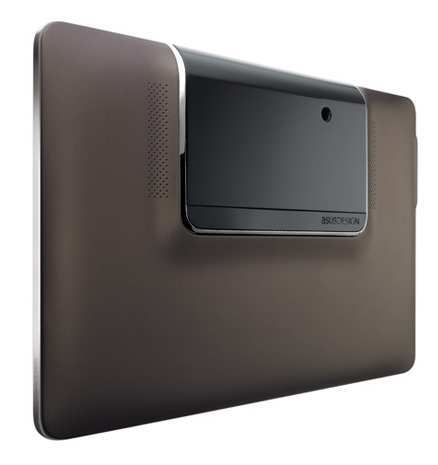 4 thoughts on “MWC 2012 Asus PadFone, possible device of the year”