Well I’m pretty sure we all know that when it comes to the tablet arena Research In Motion hasn’t done as great as they would have liked with their BlackBerry PlayBook; however that doesn’t stop some people from coming up with a new concept for the design of a new PlayBook tablet, and that’s what we have for your consideration today.

Thus Crackberry user ummie4 has come up with a concept design for the next generation RIM slate, and coming up with new designs for tablets brings the rendering imagination to life, and this brings us to the BlackBerry PlayBook 3.0 concept.

This BlackBerry PlayBook 3.0 concept features dual screens to take full advantage of multitasking so the user can watch video on one screen whilst viewing Powerpoint on the other and so on, and uses the same style keys as seen on the BlackBerry Bold 9900, but split in half and positioned either side of the lower display enabling the user to hold the slate and thumb type.

Above the split keyboards sits a trackpad and the designer says using two trackpads could be useful for gaming. The BlackBerry PlayBook 3.0 concept, like the BlackBerry Bold 9900 also features a stainless steel bezel and folds closed to protect itself.

So there you have it, a concept for the BlackBerry PlayBook and one that doesn’t look to bad, but what do our readers think? Would you be interested in the next generation PlayBook if it featured a design like this? 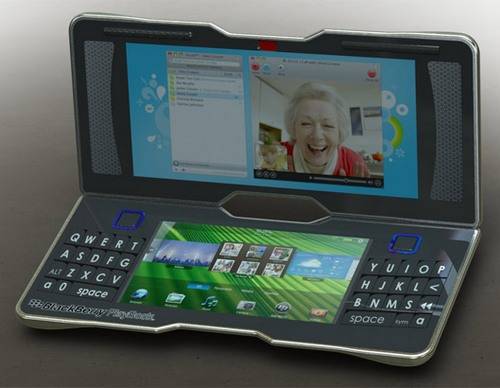