If you are holding out for some Android goodness with glasses free technology that is the HTC EVO 3D, although previously there was a “rough” release date of June 4th being bandied about, it appears that perspective owners of the HTC EVO 3D may still have a little while to wait.

According to the guys over at Phandroid, by way of Android Central, apparently the newest edition of Sprint’s Playbook magazine for employees has outed when potential owners may see the Android 2.3 Gingerbread smartphone become available.

As mentioned above, rumour speculated that the HTC EVO 3D could see release at the beginning of this month; however according to the Sprint magazine it is looking like the smartphone wont become available until the last week of the month.

That’s about as close as we can get to an HTC EVO 3D release date as there is no concrete hard and fast date specified, but at least those waiting to snap up the handset know that it is coming eventually. 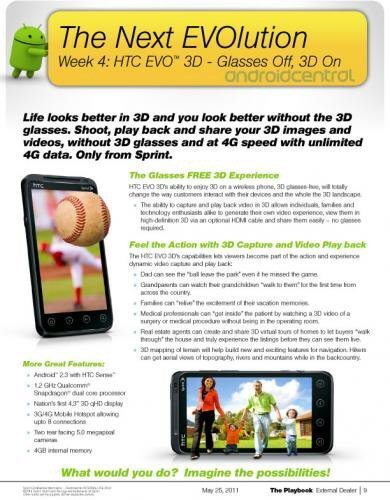