However a stabilisation has appeared during the first quarter of 2011 as Apple managed to halt its down turn and increase market share to 59 percent a rise of 2 percent on the 57 percent of 2010, and is apparently due to Apple iPad users that are “heavy app users.”

According to statistics on Research2guidance, Apple iPad support for apps will continue to remain strong as long as other app stores are unsuccessful in coming up with a competitive app store alternative for tablet apps.

Apparently if Apple can over the next 2 years, slow down their loss of market share, it should be difficult for rivals to overtake Apple for quite some time as there are a couple of factors that affect the time that rivals can catch up.

Those factors are…smartphone penetration will hit 50 percent in most developed countries by the year 2014/15 and the more mass-market smartphones become the less likely a new user will add apps, and secondly the more cash spent on downloading apps it is less likely a user will switch platforms.

However assuming the Apple App Store market share drops the same as the last 2 years and rivals push Apple market share to hit a low of 40 percent by 2015, Apple will no doubt retain the “heavy downloaders” already on the iOS platform for quite a while. 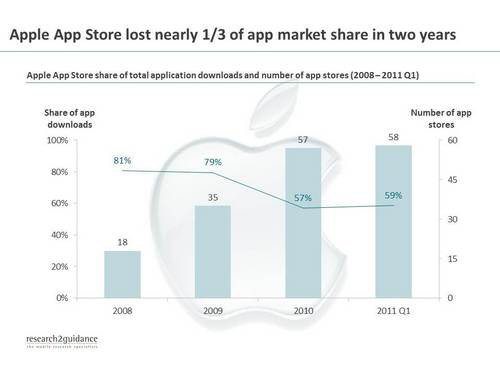