A new Apple patent that has now popped up at the US Patent Office suggests that future camera sporting Apple gear could have a new infrared iOS camera technology that would deliver “sophisticated cameras” to iOS users and would also apparently enable camera-disabling features for the music and film industries.

According to an article over on iPhone Rumors, by way of Patently Apple, the new tech if Apple goes forward with it means that revellers going to concerts and the cinema who try to take a picture or video, their iOS camera would be disabled.

Apparently if implemented into the iPhone and Apple iPad, the camera will contain infrared signals that have encoded data, which can be decoded to allow certain info such as an auto-tour guide for museums and cityscapes delivering such things as product info, availability, price, ect.

Having said that, on the down side would you really want industries to have control over your iOS camera, only allowing you to snap a picture or video of what they want? The new tech if delivered to new iPhone and iPad unit would mean officials would have a certain amount of access and control over your iDevice.

So what do our iOS readers think about this new infrared iOS camera tech, a good idea by Apple or a bad idea? Not that what the user thinks would sway Apple one way or the other, but it does look like if Apple were to move forward with this tech it could mean losing a little personal control over your device. 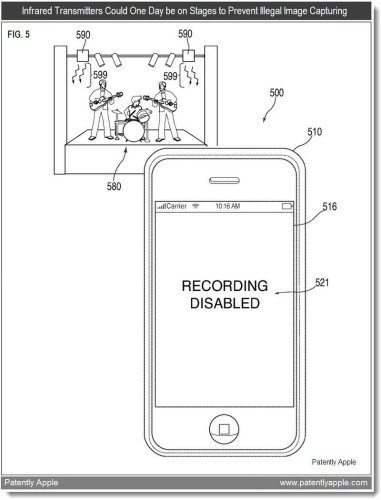