Now not every smartphone owner wants a black or white handset, and it would appear that if you like the HTC Inspire 4G smartphone you can now get one in a nice red colour, although only exclusively from RadioShack on the AT&T network.

According to an article over on Engadget, the red version has now gone official with RadioShack, which is currently being offered to potential customers for just $29.99 based on singing up for the usual 2-year term with AT&T and $15 per month, or if you prefer $549.99 off contract.

For you cash you’ll get the Android 2.2 Froyo HTC Inspire 4G in red with its 4.3-inch Super LCD touch screen, 8 megapixel camera with LED flash, 1 GHz Snapdragon processor and 4G connectivity, along with everything else the black version offers.

Still no word on just when the HTC Inspire 4G will see the Android 2.3 Gingerbread update though, but if you prefer sporting a red handset rather than black you can now do so by hitting up RadioShack, and of course they still do the black version as well. 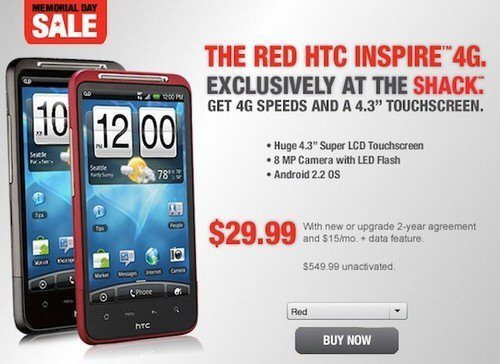