Apple iOS 5 Gets Jailbroken Via Limera1n

Well now, when did Apple unveil iOS 5? Yesterday wasn’t it? Well it appears that the iOS jailbreaking community are right on the ball and hot on the tracks of that iOS 5 unveiling have apparently jailbroken iOS 5 already via Limera1n.

According to the guys over on Engadget, a tweet from @MuscleNerd broke the news that iOS 5 running on a fourth generation iPod Touch has been jailbroken and offers up an image as proof showing iSSH and Cydia icons sitting alongside Apple’s Newsstand and Reminders apps.

Thus it would appear that Apple’s continuing war against jailbreaking their operating system is failing and failing rather quickly as iOS 5 hasn’t closed any exploits when it comes to the Limera1n tethered jailbreak, and so the cat and mouse game will continue. 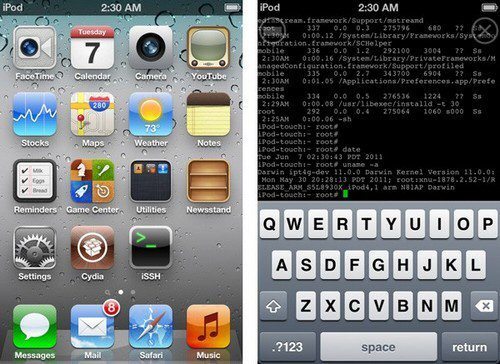