As with all things in the Mobile space, technology moves on and leaves some smartphones behind and those smartphones are destined for the mobile graveyard as they near their end of life, and thus it appears this is the case with the T-Mobile G2, now destined to go the same way as the T-Mobile G1 the original and first Android smartphone.

According to the guys over at Tmonews, the T-Mobile G2 isn’t showing on T-Mobile’s website and doesn’t even have the usual “temporarily out of stock” message attached, it’s simply just disappeared.

Apparently the guys did a bit of digging and have come up with a screen grab, which shows that the T-Mobile G2 is indeed nearing its end of life and heading for the mobile graveyard, but will probably still be around for a little while longer as the Android smartphone only has one foot in the grave so is “nearing” its end of life.

Thus if you really want the T-Mobile G2 it might be a good idea to pick up the handset now before it vanishes for good…anyone interested? 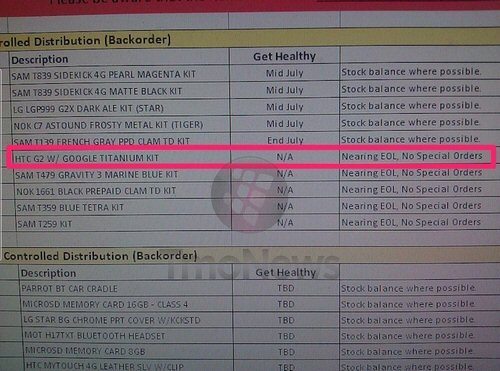