According to an article over on Ubergizmo by way of BlackBerry Blogs, the BlackBerry PlayBook OS v1.0.5 update delivers an updated Facebook for BlackBerry app, numerous tablet OS enhancements, in-app payment support, and additional languages.

Those tablet OS enhancements include PlayBook charging and battery pop-up, meaning the BlackBerry PlayBook can now be charged even when fully powered down, alerts the user when they are using a wrong charger such as your BlackBerry smartphone charger, and the device can be turned off or put into standby from the battery pop-up when it appears.

The OS update also delivers WiFi hotspot detection, headset audio boost, and enhanced video chat connections with the Traversal Using Relay Nav (TURN) protocol. Those that purchase the BlackBerry PlayBook as of today the 7th of June will automatically gain the update while current users can grab the update when presented with the update notification in their status bar. 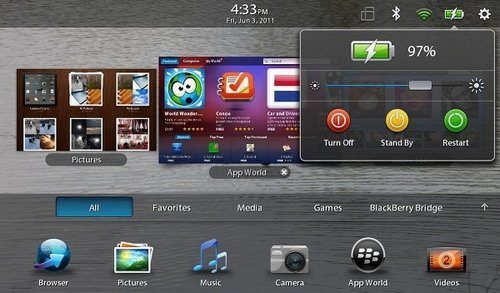