Apparently owners who enjoy watching movies on their Apple iPad can now throw away their 3D glasses when viewing 3D movies thanks to an updated iOS app for the Apple iPad called CineXPlayer, although apparently there is a little catch.

According to the guys over at Ubergizmo, that catch is to view 3D movies on your Apple tablet the user will need to slap a sheet of “Grilli3D overlay film” onto your precious device, but not to high a price to play for viewing 3D footage is it?

With the CineXPlayer for iOS tablets the app will apparently also do the 2D to 3D conversion for you so you can view your already owned 2D content in 3D, and the app can run files in virtually any format and includes support for subtitles as well as TV, VGA and HDMI output.

The CineXPlayer app for the Apple iPad also allows the user to capture a screen grab of their favourite movie scenes and post them straight to facebook without movie interruption or leaving the application. The CineXPlayer version 2.1 is available to download to your tablet from iTunes at a cost of $2.99. 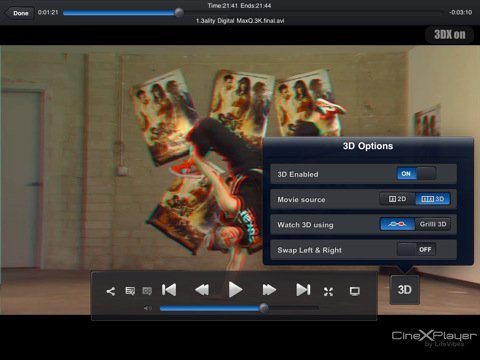