Microsoft Offers Windows Phone 7 Handsets For Next To Nothing

If you happen to be considering joining the Windows Phone 7 brigade and thinking of purchasing a new Windows Phone, it appears that right now just might be the best time for you to take the plunge as Microsoft is offering several Windows Phone 7 devices for next to nothing.

We recently posted how to get a cheap Windows Phone 7 device via Amazon gift card, and now the guys over at Pocket Now, by way of WPCentral are saying the Microsoft Store is offering Windows Phone 7 smartphones for just a penny.

The WP7 handsets on offer for that $0.01 price are the Verizon HTC Trophy, the Sprint HTC Arrive, and the T-Mobile HTC HD7 and naturally all these come with the usual 2-year agreement with the carriers, and is also good for upgrades, renewals, new lines and add a line.

So if you have been considering picking up a Windows Phone 7 handset preferably on T-Mobile, Verizon or Sprint, as there doesn’t appear to be an option for AT&T, then you should act quickly to grab a device for a penny. 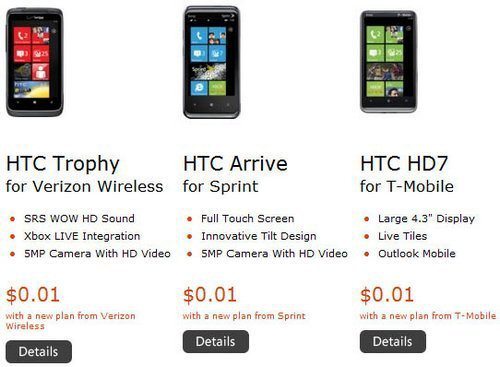