Okay, well what we have here for your viewing consideration is what the video title claims to be an Apple iPad 3 prototype sporting a 3D display; however unless the people who made this display have access to unreleased Apple gear then I doubt very much if it is an Apple iPad 3, but rather a plain old Apple iPad.

Now that’s out of the way, the Apple iPad 3 Prototype platform with 3D display video comes our way courtesy of the guys over at 9to5 Mac by way of Netbook News, and the guy in the video does say that what we are looking at could be the prototype of a future Apple iPad with a 3D display.

Apparently the Apple tablet, which looks to be an original iOS tablet was being shown off at display manufacturer CPT’s booth in Taiwan 2011, and apparently will need special eyewear that has polarizing lenses, basically not that great when you consider there are displays about that don’t require special glasses.

There hasn’t been as far as I can recollect any rumour that Apple is working on delivering an Apple iPad 3 with a 3D display, but as Apple keeps everything they work on virtually under lock and key I figure anything is possible, or maybe not.

Anyway the footage is worth a quick look to see what these guys have come up with, but don’t go holding your breath for a 3D enabled iPad 3 coming out of Apple…enjoy. 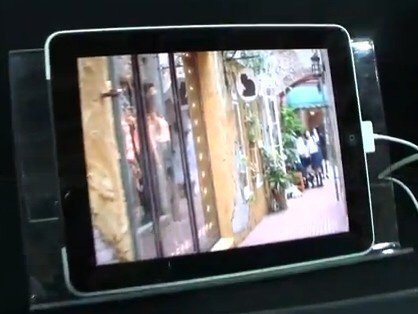