Thus far for those here in the United Kingdom, if they wanted to pick up the HTC Sensation they have only had one carrier option, Vodafone as Vodafone has exclusivity over the Android 2.3 Gingerbread smartphone; however the word is that short exclusivity is about to end and the device will be available from other carriers.

According to the guys over at Unwired View by way of So Mobile, UK retailer Phones4U have apparently confirmed that the HTC Sensation will become available in the UK via both O2 and Orange.

Phones4U has said they will offer the HTC Sensation on both Orange and O2 networks as of the 8th of July, so potential customers still have a little bit of a wait if they prefer not to go with Vodafone.

For those that want to grab the HTC Sensation via Phones4U they will offer the Android smartphone as a free handset on Orange for a tariff of 30 quid a month, while if you prefer O2 you can get the device for free for Â£32 per month.

So there you go, anyone looking forward to snapping up the HTC Sensation either on O2 or Orange in about a months time? 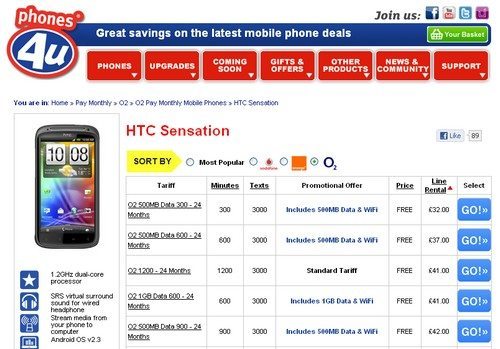