For those over in Canada and who are Rogers faithful, you will soon be able to get your hands on some HP gear in the form of the new HP TouchPad webOS tablet and the HP Pre 3 smartphone, and apparently word has now come down as to when Rogers will offer the HP devices.

According to the guys over at Unwired View, the guys at Mobile Syrup have been tipped off by the usual anonymous sources that the HP TouchPad will be available from Rogers as of the 15th of July, so still a bit of a wait.

Apparently price wise, although Rogers hasn’t confirmed any pricing a leaked document shows that the HP TouchPad will be offered for $499 for the 16GB model and $599 for the 32GB slate, and currently it isn’t clear whether Rogers will have exclusivity over the device or not.

As for the HP Pre 3, the word is Rogers will also offer the successor to the Palm Pre 2 as of the 19th of July, no word on what Rogers will ask for the webOS smartphone yet though. So there it is for what its worth, anyone in Canada interested in picking up one of these HP devices? 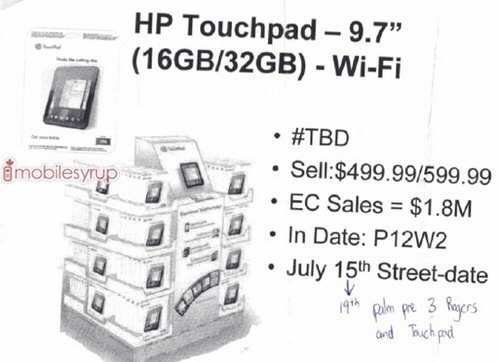