We always look around for great products and new inventors, especially when it surrounds smartphones such as the Apple iPhone. Below we will let you know a little about the BubbleScope smartphone accessory and BubblePix app. Hope you like it.

The BubbleScope is the latest innovation from British inventor Tom Lawton, that allows the user to capture 360Â° images or video in a single click, with a real-time preview and no image stitching.

The BubbleScope works with a range of smartphones, only requiring a change of phone case to attach it to any supported device. Importantly the BubbleScope uses the BubblePix phone App for previewing, capturing, viewing and then sharing 360Â° bubbles online via Bubblepix.com to Twitter, Facebook and more. For the first time 360Â° imaging is truly easy, quick and fun!

BubblePix Ltd is launching the new BubbleScope on the CrowdFunder website this week, giving the public the chance to own one of the very first BubbleScopes off the production line and become a beta tester for the phone App and web community launching later this year. BubblePix is using crowd sourced funding, a great source of finance for product innovators in the current climate, to sponsor the initial manufacturing run of BubbleScope devices and iPhone 4 compatible cases. It is offering those who pledge their support for the product the opportunity to be the first in the world to get their hands on the gadget set to shake up the world of smartphone photography, prior to the retail launch scheduled for later in the year. 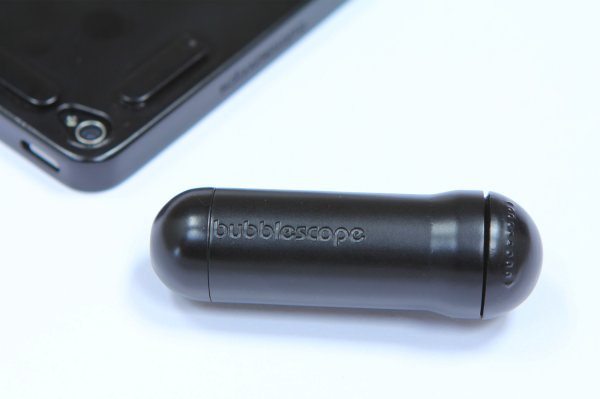 Tom Lawton (tomlawton.com) is the driving force behind BubblePix and the BubbleScope project. He has spent the last 10 years researching and testing many prototypes to finally launch a device that captures the complete 360Â° environment in an instant. Tom explains, ‘ten years ago I was inspired by the beautiful world around me to create the best, most practical, compact and affordable instant 360Ëš panoramic camera possible. My vision was to enable anyone to capture and share their experiences as 360Ëš bubbles. Today that dream is a reality and I am thrilled to be launching my BubbleScope product this summer. When life inspires you, just shoot the bubble!’

Final pre-production testing is now being carried out and the BubbleScope will be available to pre-order through UK crowd funding site crowdfunder.co.uk from June 15th 2011. You can also show your interest by checking out Bubblepix.com before the retail launch in Autumn 2011. 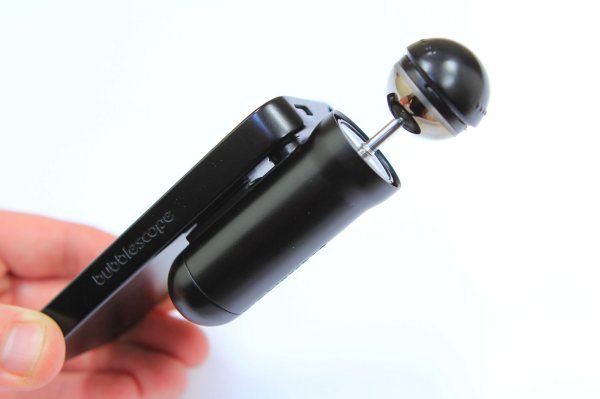 HOW DOES THE BUBBLESCOPE WORK?
The BubbleScope itself works by using a precision engineered hemi-spherical glass mirror to capture the 360Â° environment around the device. An arrangement of corrective optics and an angled mirror then re-directs the light into the camera’s standard lens and produces a ‘doughnut’ shaped 360Â° image. A bespoke App is then used to ‘unwrap’ this into a complete panoramic image in real time, which can then be previewed and captured as a still image or a video. The BubbleScope captures a 360Â° horizontal, 120Â° vertical field of view so a truly immersive panoramic image or video of the environment around the device can be accomplished in just a single camera frame. 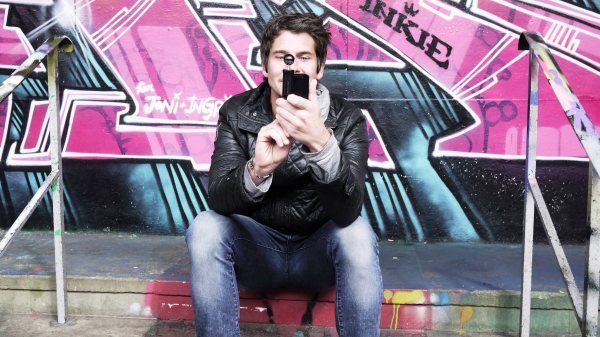 SHOOT IT — VIEW IT — SHARE IT
The greatest thing about BubbleScope is that the 360Â° images can be instantly previewed, captured and shared with anyone, anywhere in the world. The BubblePix App allows you to share images via Twitter, Facebook and other major social media platforms in conjunction with Bubblepix.com. The BubblePix web services also enable users to view, store and share their images and video, publically or privately through an online account, via tablet PC, iPad and other devices.

SIMILAR TECHNOLOGY
There are alternative smartphone products on the market that are able to take 360Â° panoramic images. These are mostly App that stitch individual images together, which takes time and produces a result that doesn’t actually capture the whole environment in a single moment. More recently a few optical accessories have appeared, however the innovative thing about BubbleScope is that it allows for the first time to:

– Preview the 360Â° environment as a panoramic image in real time before it is captured without any delays and waiting time for software processing and stitching.
– Instantly capture the entire environment around the device in a single bubble and then review or share it as quickly as a normal image or video.
– Capture moving objects all around into both still images and video on all major smartphone platforms and devices.

WHY BUBBLESCOPE IS BETTER
– BubbleScope is designed to work on the iPhone 3GS onwards as well as major Android and Windows Mobile handsets. Not just one device or platform exclusively.
– BubbleScope shoots high-resolution* still images and video not one of the two. As the BubbleScope is compatible with multiple devices, the image or video resolution depends on the individual device capability. However, the BubbleScope uses precision glass optics and a maximized camera aperture to ensure the best resolution and image quality are made possible for any individual device.
– BubbleScope has a 360Â° (horizontal) x 120Â° (vertical) field of view, which creates a more immersive bubble-like image and the largest vetical field of view for a smartphone accessory.
– BubbleScope is stylish and compact in design. The spherical mirror retracts into the BubbleScope when not in use, to not only protect the optical elements but also to make it easy to carry in your pocket or bag.
– The BubblePix App is designed to be simple to use and not only allows real time preview of the image you are about to capture, but also uses the same App technology to minimize capture and review time so that it is now as quick and easy to save and share 360Ëš images and video as traditional ones.
– BubbleScope’s social media sharing is an integral part of the whole product experience.
– BubbleScope is designed to work on multiple devices so if you upgrade your phone or want to use it on multiple devices, all you need is the right case to transfer the device. The BubblePix App is free to download to as many devices as required and of course the precision optics mean that as new and more powerful smartphones come on to the market, your bubbles simply get better and better!
– BubbleScope’s proposed retail guide price of Â£49.99** (BubbleScope) + Â£14.99** (Device specific case) means that not only is it the world’s first truly quick, easy and fun 360Âº imaging solution, it is also represents truly great value for money.

MORE BACKGROUND:
Inventor: Tom Lawton is the great young British designer who invented BubbleScope. Tom is a leading practitioner of sustainable design, having won the coveted Green Dot Award in the US for Environmental Excellence (2009) with his invention Firewinder, The Original Windlight. Tom is recently famed for his role as the judge of CBBC’s My Genius Idea, where children from across the country pitched their genius ideas to Tom who, over a process of nine weeks, selected the winner. My Genius Idea was produced by Shine TV and aired on BBC One in the autumn of 2010 and subsequently on CBBC in Spring 2011. Tom first gained notoriety as an inventor in 2000 with his invention WakeYoo the recordable alarm clock. You can find more information on Tom at www.tomlawton.com.