More For Me T-Mobile Android App: US Discount Deals and Offers

If you are over in the USA and own an Android smartphone, and love taking advantage of offers, deals and discounts, you might like to know that T-Mobile has now released their first Android app for all Android users regardless of carrier that delivers the best daily deals available to your device.

According to the guys over at Phandroid, the T-Mobile More Foe Me app for Android brings to the user the best daily deals from such websites as Living Social and is “custom tailored” to suit the users demographic and interests.

It appears the T-Mobile More For Me app for Android is going down a treat with those that have already grabbed the app, with reviewers saying such things as “Great to get all my daily deals in one place!” while another says, “This is a great idea (although not necessarily original) to consolidate the deals in your local area. The app looks nice too. However, it appears that it is just pulling from two deals services for me (LivingSocial and Goldstar [who?]). No Groupon? No Google Offers?”

Thus it would appear that the T-Mobile More For Me app does have its limitations, however if you wish to take advantage of the deals app you can do so by downloading it to your preferred Android device from the Android Market for free. 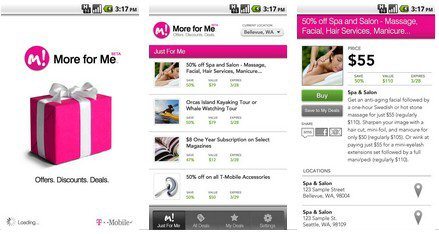