It appears that T-Mobile is destine to get a new smartphone from LG that currently doesn’t have a name and is thus far unannounced, and sports dual screens and was apparently showcased at an event in the United Kingdom along with several US bound handsets so it’s not too clear if this one is destined for the US only or whether it will be available in the UK or not.

According to an article over on Unwired View and by way of Pocket-lint, the device is manufactured by LG for T-Mobile and judging by the size of the main display doesn’t appear to be a high-end smartphone, but features a slide out QWERTY with a smaller touch screen in the middle of the keyboard.

Apparently this secondary display is where apps are shown as shortcuts, with 2 of the 8 spaces remaining blank ready for the user to assign their own preferred apps one would assume. The Pocket-lint guys say that the device could be the LG Flip II although that is unconfirmed, and they say the handset is pretty hefty and thicker than the Motorola Milestone 2.

The Android handset sports a rear camera with LED flash but it isn’t know what megapixel it may be, and that’s all that’s known at the moment, so we’ll let you know more if and when we hear. 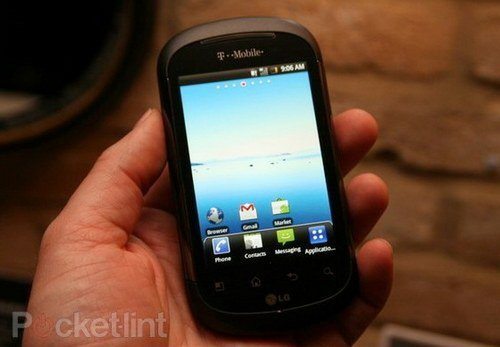