Well what do you know; Orange UK has come up with yet another unique way of people charging their mobile phone at Glastonbury 2011, this time Orange UK has released a t-shirt that can apparently deliver juice to your handset whenever you need to.

According to an article over on Engadget, by way of Textually, Orange UK has launched a prototype t-shirt that uses noise responsive tech and is to conduct live tests at the Glastonbury Festival to see which performances are “best to charge to” at the Spirit of 71 stage.

Apparently the t-shirt generates an electric charge produced from the sound around it. The co-producer of the Spirit of 71, Tony Andrews says, “Sound vibrations, particularly bass frequencies, will create enough shaking to produce electricity from a material as simple as piezoelectric film. It looks like it could provide a real solution to mobile charging and I’m interested to see how the Orange Sound Charge performs in a live testing environment such as Glastonbury.”

Apparently the idea is users plug their mobile phone into their t-shirt when watching bands perform and the noise from the entertainment will charge your handset. Seems like a good idea to me, but I guess the closer to the stage you are the better the charge. 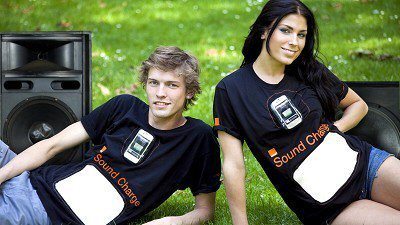