According to an article over on Android Central by way of Droid-life, both the Motorola Xoom LTE and Motorola Droid 3 have now been added to Verizon’s minimum advertised price (MAP) list, something that is usually a good indicator that a device is nearing launch.

The guys do say that there’s no telling if this Motorola Xoom LTE is the same device seen in the Verizon commercial that hit the net the other day and was quickly set to private, but has now been made public once again so you can view the advert below, or whether it is an ordinary Motorola Xoom sporting an LTE radio.

The guys also state that adding the Motorola Xoom LTE to the list could also be a good sign that word on sending in non LTE Xoom tablets for an upgrade should come in the not too distant future. The Motorola Droid 3 is expected on the 7th of July, but as yet no hard date for the Motorola Xoom LTE…enjoy the video below. 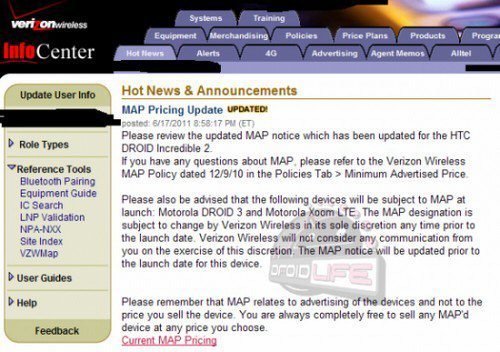