Well now I’m not too sure whether Apple and Motorola will like this very much but apparently T-Mobile is saying that the Android 3.0 Honeycomb T-Mobile G-Slate tablet is twice as fast as the Apple iPad 2 and three times as fast as the Motorola Xoom, and more so have been given “legal approval” to say so.

According to the guys over at Tmonews, they have got hold of an internal T-Mobile doc that claims that T-Mobile has received “legal approval” to “definitely” claim that the Android G-Slate tablet is in excess of “2x faster than the iPad2 on AT&T and Verizon, and over 3x faster than the Motorola Xoom.”

However, apparently this is based on the speed claims being on T-Mobile’s HSPA+ 42Mbps network, Verizon’s 3G network and AT&T’s HSPA+ network. There are a couple of things that are obvious according to the guys; firstly the T-Mobile G-Slate doesn’t actually take full advantage of 42Mbps as the device is limited to 14.4Mbps, whist the second is apparently T-Mobile is taking advantage of the fact that Motorola hasn’t updated to 4G LTE hadn’t hit yet.

Having said that there will always be claims that our tablet or smartphone is faster and better than the rivals, but I bet it stings a bit for Apple and Motorola knowing that T-Mobile has gained that “legal approval” to say the G-Slate is better that their tablets don’t you? 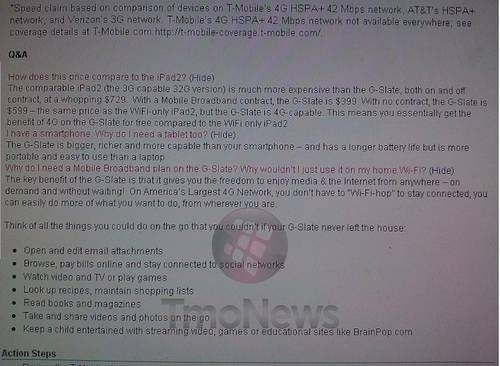