Another Android against Android comparison video for your viewing pleasure today, where the new HTC EVO 3D battles against the HTC Sensation 4G, two top notch headsets released within just two weeks of each other, so which device can capture your interest most, will it be the EVO 3D or Sensation 4G?

The two-part video dogfight between the HTC EVO 3D and HTC Sensation 4G comes our way courtesy of Aaron Baker over at Phone Dog and jointly delivers almost twenty-eight minutes of checking out both Android smartphones.

As you probably know both handsets run Android 2.3 Gingerbread, sport 4.3-inch qHD touch screens, and 1.2GHz processors, although the big differences are that 3D capability of course, along with the EVO 3D having duel 5 megapixel cameras with 720p video while the Sensation 4G has an 8 megapixel camera with 1080p video, but the EVO 3D has 1GB of RAM while the Sensation 4G only has 768MB.

So which of these two heavyweight Android handsets can best the other and come out tops in this Android fight? Well to find that out you’ll need to head on down and mash the play buttons to find out if you agree with Aaron’s appraisal of the two devices…enjoy. 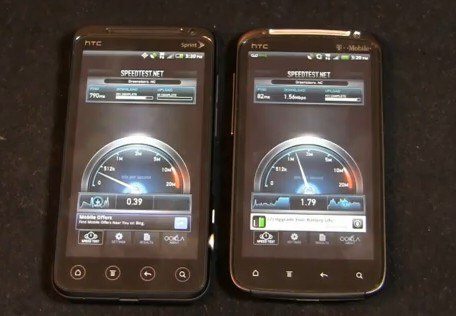