As you probably know, the way forward in the mobile space appears to be glasses free 3D, and we have a comparison fight between two Android smartphones that offer 3D functionality for your viewing consideration below, in a video confrontation between the HTC EVO 3D for Sprint up against the LG Optimus 3D, a device that will hit AT&T as the LG Thrill 4G.

So onto that battle of the 3D Androids, the confrontation come sin the form of a two-part video courtesy of Aaron Baker over at Phone Dog and when combined delivers a nice long twenty-eight minutes 3D battle for you to drool over.

The LG Optimus 3D on the other hands offers against a 4.3-inch qHD touch screen, dual 5 megapixel cameras, a 1GHz TI OMAP dual core processor, Android 2.2 Froyo operating system and a custom user interface, so at first glance it would appear the Optimus 3D is lagging behind the EVO 3D in the OS stakes anyway.

The LG Optimus 3D should now be available in the UK as we reported a few days ago, the Android smartphone would be in stock with the Carphone Warehouse as of the 1st of July but doesn’t officially go on sale until a few days time on the 7th, and will at some point soon hit AT&T at the LG Thrill 4G although the actual release date isn’t known.

So, although we here in the UK will have our hands on the LG Optimus 3D before our American cousins, which makes a change, they can look forward to picking the device up quite soon.

However, if you wish to get into the 3D glasses free picture snapping game, which of these two Android 3D handset should you go for, is the HTC EVO 3D the one to go for or does the LG Optimus 3D/LG Thrill 4G best the Sprint 3D handset?

Well as you should be used to by now, you know I’m not going to tell you as that would kind of kill the point of watching the video footage below, so I’ll leave it right there and let you head on down and mash the play buttons to check out what Aaron thinks of these two 3D Android snappers…enjoy. 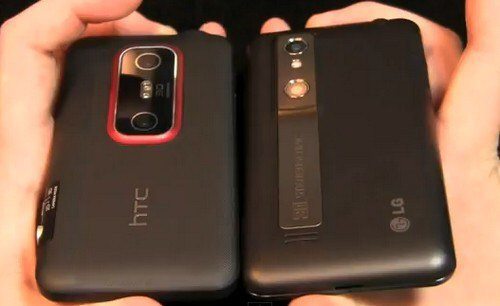