Well now you didn’t think that HP was only going to push out the HP Veer 4G and the HP TouchPad tablet as the only webOS enabled devices did you? Obviously not, and today we are treated to a little info on what HP has up their sleeve when it comes to future webOS enabled products as their raod map has hit the net.

According to the guys over at Pre Central, they somehow managed to get hold of a confidential HP product brief that lists some of the future webOS devices HP is expected to release, so here’s what that confidential HP brief lets us know…

Although the webOS 3.0 HP TouchPad has only just become available, there’s a new white version on the cards for August with a spec upgrade to 64GB and an upgraded processor, apparently the rumour is it might be a 1.5GHz duel core Snapdragon.

As for the HP Opal, it’s a 7-inch webOS slate that hasn’t had much mention since its design docs were leaked back in January so is still somewhat of a mystery tablet but the word it is could come out to play as the HP TouchPad7 in the fall.

Apparently the document also notes that HP acknowledges that the HP TouchPad 16GB supply is somewhat limited and is apparently persuading retailer to push the 32GB model as often as possible, and apparently all HP TouchPad accessories are also “under constraint.” Furthermore HP TouchPad advertising by retailers is apparently under embargo until the 17th of this month, which basically means any ads seen about the device, should be from HP up until then.

So there you go, if anyone is still actually one of the webOS faithful you can at least expect another HP TouchPad, a webOS smartphone and a 7-inch slate in the future, that is of course if the road map sticks to form and doesn’t alter of course. 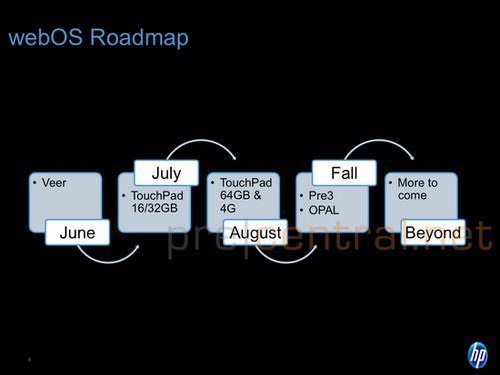