iPhone and Android Up BlackBerry Down in US

There is a continuing battle in the smartphone market for who gets the top place and none more so than in the United States, and a recent survey appears to show that only two platforms are increasing in US market share and those to are of course Apple’s iPhone and Android smartphones. BlackBerry, which used to be one of the major contenders, seems to be faltering somewhat though.

Smartphones continue to grow in popularity in the US and according to a May survey by Neilson of mobile consumers in the United States, 38% of those surveyed now own a smartphone while 55% brought a smartphone in the last three months rather than a feature phone.

Currently leading the market share war in the US is the Android platform with 38% of smartphone users owning some kind of Android handset. However according to the report in the past several months Apple’s iPhone has shown the most growth and hit 27% while Research In Motion’s BlackBerry smartphones saw a drop to 21%.

As for the other smartphone platforms, Microsoft’s’ Windows Phone garnered 9% market share, Symbian and webOS have 2% each, while Palm, Windows Phone 7 and other platforms only command 1% of the US market.

However in the US, feature phones still command a huge portion of the mobile market with 62% while smartphones have 38%, so the feature phone still outweighs the smartphone for now.

Obviously Android holds on to the lead in market share in the US through the vast array of differing smartphone the Android platform uses, while it has to be said that Apple does have just one smartphone to their credit albeit still having the earlier iOS handsets.

The market share battle between the iPhone and Android will always be there, BlackBerry used to be a contender as many people loved BlackBerry but in recent months BlackBerry seems to have lost its appeal with the masses as Android grabs most of the attention.

However no doubt as Apple is expected to release the iPhone 5 at some point in the not too distant future, the word doing the rounds is September, although unconfirmed, Apple’s market share should see quite a boost as the vast base of iOS faithful rush to grab the latest iOS smartphone to hit the streets.

Market share probably doesn’t mean a great deal to the everyday smartphone user, as it doesn’t affect them in any way, but big companies such as Apple, Google, and BlackBerry and others all want to be at the top of that market share pile. 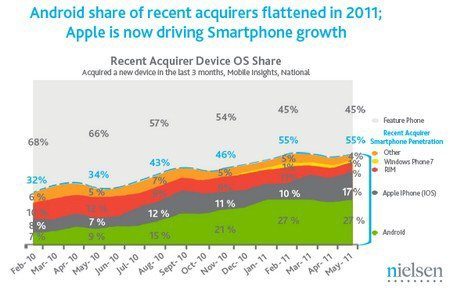