The accessory market for iOS devices is quite big business, and now JVC Victor has got into some of the iOS accessories action and has unveiled their new dual docking station with audio system for the iPhone and Apple iPad.

Although docking stations aren’t that new when it comes to Apple Gear but this is probably the first that can house both the iPhone and Apple iPad simultaneously. According to an article over on Akihabaranews, there are two models, the UX-VJ5 and UX-VJ3 and are both compatible with the Apple iPad and Apple iPad 2 as well as the iPhone and iPod Touch.

The JVC Victor Dual Docking Audio System for iPhone and iPad features an FM/AM radio tuner, video out for shooting off your favoured content to your big TV or PC, PC in, Audio in, and a 2 x 15watt output.

The difference between the two models is that with the UX-VJ5, hidden behind the cover where the Apple iPad sits is a CD player supports MP3 files so apparently has the ability for the user to rip all their MP3s onto a CD and playback inside the system and a USB port so you can pay on any external system.

However apparently if you would like one of the JVC Victor Dual Docking Audio System models for your Apple iPad and iPhone, then you need to head to Japan, as apparently JVC Victor will release the accessory to the Japanese market either by the end of this month or early in August.

Judging by the accompanying images with the article, the JVC Victor Dual Docking Audio System for iOS devices will be available in several colours, white, black, brown, pink, green, and purple, although no doubt those colours will have more flashy appropriate names.

As for the price tag the JVC Victor dual docking audio system for the Apple iPad and iPhone will cost, unfortunately JVC hasn’t yet slapped a price ticket on the device, so for now we have no idea just how much it will hit your pocket for.

Other than that, that’s your lot as I simply can’t read Japanese to glean any more details in the release which is posted below, so if you can speak Japanese and come across anything exciting feel free to let us know by posting to our comments area below. Any of our readers like the look of this new accessory for iOS devices? 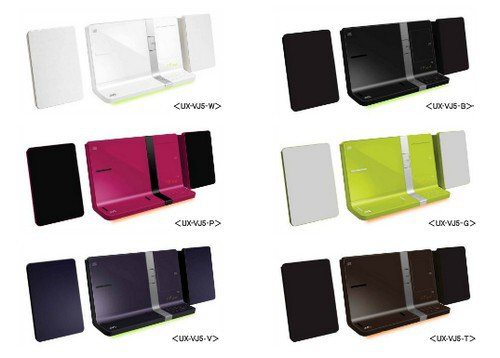