So how’s your love life. Satisfying or are you considering starting an affair with someone, if so your smartphone could easily give away you are playing the field if your spouse checks your handset for unwarranted explicit text messages or emails, but with a new mobile app you can keep your illicit affairs under wraps.

The Loky app available for Android, BlackBerry and Nokia handsets will apparently allow men and woman that are involved in playing away from their partner to keep that relationship along with everything else about their private lives and secret encounters firmed under lock and key so they don’t get caught out by their partner.

The Loky app has been designed in such a way to protect private text messages, contacts, and personal files, and also has the ability to intercept calls, so basically if your bit on the side rings or messages you wile your partner is around they will be none the wiser.

Sean Leahy, a spokesperson for Loky says, “we are delighted to work together with Illicit Encounters and have the opportunity to market our Loky app to users of the UK’s largest married dating service in such a unique and direct way. We see this as an excellent fit for our app with a target audience and a win-win for both companies. From our point of view we think Illicit Encounters’ users will derive great benefit from our app and can be assured private contacts, messages or files will not be found by their partners. Divorce can be an expensive business after all.”

Rosie Freeman-Jones, spokesperson for Illicit Encounters says, “Research shows that nearly 60% of women think it’s perfectly acceptable to check their partner’s mobile phones for inappropriate text messages and unknown numbers. Most women will even admit to their partners that they regularly check their phones. Even though most men are caught by their phones, they still persist in conducting their affairs in this way, with clear evidence showing on their handsets. We hope our partnership with Loky will serve to help these men keep their private lives truly private.”

For those that are thinking about picking up the Loky privacy app for their smartphone so they can dupe their partner while playing the field we have an overview video of the app for your viewing entertainment below. 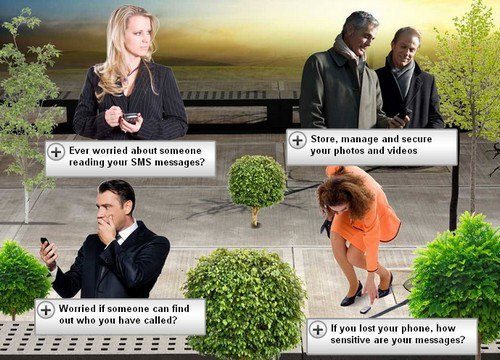