We know how our readers enjoy a good honest full on smartphone comparison fight, so we have one for your viewing consideration below, a comparison battle tow-part video that pits 4G against 4G, and Android against Android in an all out slug-a-thon between the HTC EVO 3D and the Samsung Nexus S 4G smartphones.

The two-part video comparison dogfight between the HTC EVO 3D and Samsung Nexus S 4G comes our way courtesy of Aaron baker over at Phone Dog and jointly delivers a nice long twenty-four minutes of in your face comparison fun.

Both the EVO 3D and Nexus S 4G are on the Sprint network and both have 4G connectivity while as you probably know the HTC EVO 3D has the added advantage for glasses free 3D capability and both available for $199.99 on a two-year agreement.

The HTC EVO 3D is the latest Android smartphone to hit Sprint and is the carrier’s first dual core smartphone, while the Samsung Nexus S 4G has been available for some time.

According to Aaron although the HTC EVO 3D has the edge over the Samsung Nexus S 4G via its 3D glasses free capability, as 3D is fairly new to the mobile space users do need to hold the display at a certain angle to view 3D content properly.

So with all that said, can the HTC EVO 3D out class the Samsung Nexus S 4G and come out the overall winner in this comparison battle? Well you know I’m not going to tell you so head on down and hit this play buttons to find out the result, and see if your agree with Aaron’s appraisal or not, and of course we’d love you to share your opinions on this video fight to our comments area below…enjoy the footage. 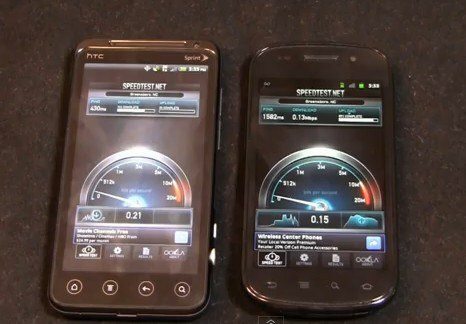