iPhone 5 Of A Different Colour

Ah the wonderful world of speculation when it comes to Apple Gear, especially when it comes to the iPhone and second guessing what Apple has up its sleeve for their iPhone 5. The rumours are in abundance but its nice to know someone can still take Apple and its iOS smartphone with some levity, as with the latest piece of comical comic strip.

The guys over at The Joy of Tech have come up with a comic strip, which you can see below that delivers a light-hearted take on the upcoming iPhone 5 and suggests that perhaps the iPhone 5 could be an orange handset with an extended screen and a real keyboard.

Obviously it is just a joke, but a joke that has been based on the numerous rumours that have been doing the rounds concerning Apple’s next generation iPhone since first word that the device was in the making.

Which brings me to a question, so far all Apple has done with their iOS smartphones is stick with black and after god knows how long finally delivered the white iPhone 4 after numerous delays blamed on the paint and such.

So how about Apple expanding their colour range with the iPhone? I know the iOS faithful can of course give their iPhone a makeover by adding a case of a different colour, or they could go the Colorware route, but wouldn’t it be good if Apple could give iOS customers an iPhone in any colour they want?

To be honest, black and white does become somewhat boring after a while, although those that use their smartphone for business purposes would probably stick with one or the other, but your everyday average user does like to spice up the appearance of a handset now and then as attested by the many differing cases and such available out there.

Now I’m not saying Apple should abandon black and white for the iPhone 5 or future iPhone handsets, but giving the customer a wider option when it comes to colour I would have thought would have been a good move for the future and would in part negate the need for a customer to shell out their cash on a case.

So, what do our reader’s think about the iPhone and colour, would you like to be able to pick up an iPhone in orange, red, pink, blue, green, purple, yellow or other as well as, or do you feel Apple should stick with just black and white? 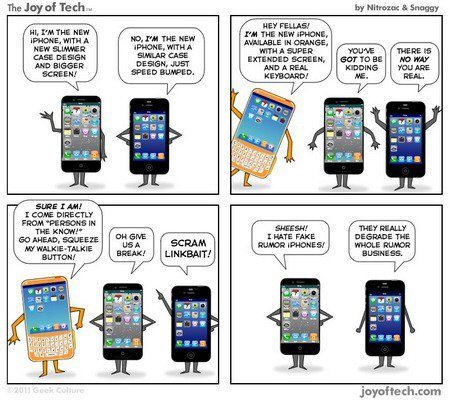