For the young in the groove mixers and DJs out there, iOS DJ apps have been around for quite some time, but now there is a physical DJ controller that is compatible with the Apple iPad and the iPhone, and is the result of a join effort between Newmark and algoriddim called the iDJ Live DJ Controller.

According to the guys over at Ubergizmo by way of Cisionwire, the iDJ Live DJ Controller is supported by algoriddim’s djay iOS app that enables the user to scratch and mix music, which is linked to their iTunes library.

The iDJ Live controller features a central mixer section with cross fader and two large performance platters, with an abundance of knobs and buttons to simulate the 2 deck and mixer set up as used by professional DJs albeit professional DJs probably wouldn’t use it as it’s more for the amateur DJ.

However the device does look pretty neat and we have a video demo of the iDJ Live Controller below for your viewing pleasure, which lasts nearly a minute and a half and basically shows you hat you can do with the device.

Newmark product manager Chris Roman says, “With a familiar setup and great controls, iDJ Live brings true DJ capabilities to iPad. It’s so affordable and fun to use, iDJ Live is going to open up the world of DJing to entirely new audiences.”

While the CEO of allgoriddim, Karim Morsy said, “Used on its own djay for iPad, iPhone and iPod touch provides users with a complete and easy-to-use set of professional DJ capabilities, but those that combine djay with iDJ Live will have the most powerful DJ tools and hardware available without upgrading to costly professional equipment.”

Judging by the video footage the accessory looks to perform fairly well, and the iOS app seems to be in sync with the device and the sounds not too bad either. Although we can’t vouch for the quality of the iDJ Live Controller it is manufactured by Newmark who are well established within the industry.

So how much will the iDJ Live Controller for the Apple iPad and iPhone set back the budding DJ? Well you can purchase the djay iPhone app from iTunes for a buck; while the iPad app costs $20, and as for the controller itself well that will hit your pocket to the tune of $100. So all you have to do now is head on down and mash that play button…enjoy. 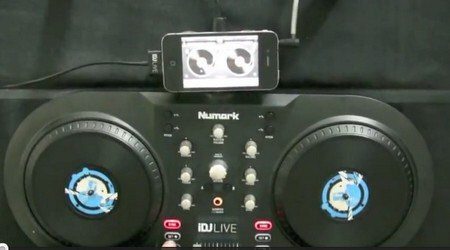