We haven’t really heard a great deal about the latest Android smartphone to become available on US Cellular, but now that the smartphone is available on the regional carrier we have a two-part in-depth review of the much rumours HTC Merge that was originally rumoured to be headed for Verizon Wireless.

The two-part review video of the US Cellular version of the HTC Merge comes our way courtesy of Aaron Baker over at Phone Dog and combined delivers just over twenty-two minutes of getting up close and personal with the Android handset.

Aaron does say that the HTC merge is somewhat behind the mid-rage Android devices out there such as the HTC Desire or the Samsung Mesmerise, but the handset’s metal accents do make it look attractive and is a nice addition to US Cellular’s Android offerings.

It’s taken quite a while for the HTC Merge to actually come out to play with the device rumoured to be heading to Verizon a couple of times and even popped up on the Big Red’s website some time back but in reality has only made it to regional carriers rather than the USA’s largest carrier.

Aaron does say that the HTC Merge is pretty speedy despite only packing that 800 MHz processor, capable of global roaming and is a good handset for those that love a physical QWERTY keyboard for heavy texting.

So if your preferred carrier is US Cellular, is the HTC Merge the smartphone for you or should you pot for another device such as the HTC Desire? Well as always you know I’m not going to say but rather let you head on down to hit that play button and check out the HTC Merge review footage, and as always we’d love you to let us know your views on the HTC Merge and u=you can do so by posting to our comments area below…enjoy the review. 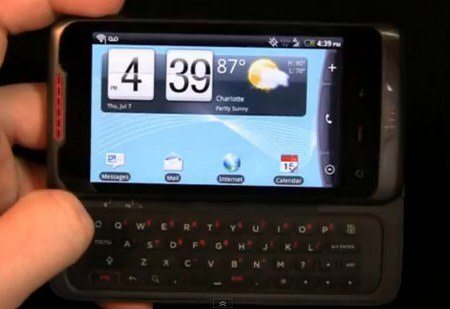