Now whether or not you are a fan of Apple gear the video footage we have for your viewing pleasure below doesn’t in any way, shape or form mean that the iPhone is the only smartphone that is ideal for firing from a slingshot, yes I said slingshot, as shown in the footage below the iPhone can double as an arrow.

Thus we have for your viewing amusement below a video whereby YouTube user Jorge Sprave has created a slingshot designed for launching the iPhone in a not too friendly way.

The Slingshot versus iPhone video comes our way courtesy of the guys over at Slash Gear and delivers five and a half minutes of footage whereby you can check out Jorge using the specially designed slingshot to fire the iOS smartphone.

Of course one has to say that probably any smartphone could be used as slingshot ammo. In the video we see the iPhone launched skyward albeit not really being able to see how high it flies, then the iPhone is fired at “ballistic gelatin,” which emulates the behaviour of human flesh.

Jorge takes the iPhone 3GS and launches it flat against a brick wall and the final insult that will probably make the iOS faithful cry where Jorge fires a 20mm steel ball at the iPhone right in the face and even slows down the action so your can see just how hard that steel ball hits the beloved Apple handset.

Obviously we don’t endorse constructing a slingshot as Jorge has done just so you can destroy your own iPhone or other smartphone, but for those that have the hates for Apple’s favourite handset I’m sure they will get a kick out of watching the handsets being destroyed in an unusual way.

Obviously no iPhone remained intact after this test, but the weird thing to me is that Jorge actually has a vampire stake that he shoots from the slingshot, which begs the question why would anyone possess a vampire stake? Perhaps Jorge is a Van Helsing type vampire hunter.

Anyway head on down and hit the play button to check out the iPhone destruction in all its glory, and who knows maybe Jorge will get some backing form Google for his iPhone annihilating slingshot, that is as long as Jorge doesn’t start using Android handsets as ammo of course…enjoy. 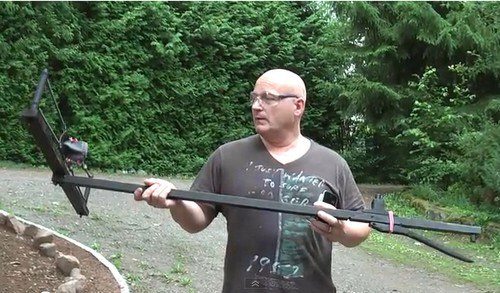