If you are going to tout the latest concept car ahead of the Frankfurt Motor Show that’s coming up in September, then why not show off one of the car’s features that might grab the attention of tablet users, specifically users of the Research In Motion BlackBerry PlayBook.

Apparently the Renault Frenzy is a commercial business car and also features a “Family mode” which apparently takes the vehicle concept from work into the land of play as the vehicle’s centre console features a docking station for the BlackBerry slate.

According to the RIM PR…” The user-friendly layout of the driver’s environment and tablet turn FRENDZY into a truly interactive and communicative tool. The BlackBerryÂ® PlayBookâ„¢ tablet recently launched by Research In Motion (RIM), plugged into the dashboard, has enabled the concept of an office on wheels to become reality. BlackBerry PlayBook is ultra-portable (seven-inch touchscreen, 425g in weight, measuring 130mm x 194mm x 10mm), yet it delivers advanced performance, uncompromised web browsing with support for AdobeÂ® FlashÂ®, HD multimedia, advanced security features and out-of-the-box enterprise support.”

The video, which can be viewed below delivers a one and a half minutes look at the Renault Frenzy with the BlackBerry PlayBook making its cameo appearance at roughly the 49 second mark, but other than that its all about this new electric concept car.

Apparently as soon as the BlackBerry PlayBook is plugged into that centre console, the RIM slate becomes “integral element of the vehicle and configures itself into the Renault environment. Continuity of work is assured once the device is removed, and it can of course be used for all of the renowned BlackBerry PlayBook tablet features.”

The PR also states “BlackBerry PlayBook can allow users to benefit from an effective workplace and unrestricted mobility while on the go. This makes it particularly well suited to neighbourhood deliveries and local craftsmen, for whom it is a genuine work tool, both inside and outside of the vehicle.”

Anyway head on down to check out the video of the Renault Frenzy concept car with the BlackBerry PlayBook, and actually looks like a real nice motor…enjoy. 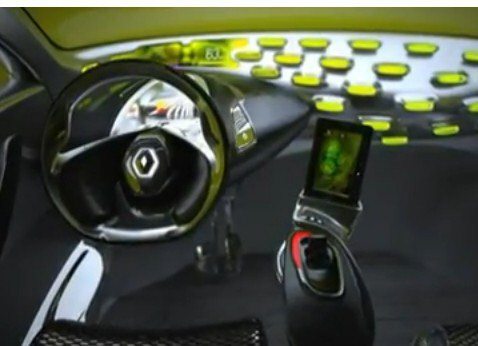