Yes I know, but Apple still likes to promote their iOS smartphones even though basically we’ve seen it all before in their “If you don’t have an iPhone” TV commercials, and this latest advert still retains the same old boring line, perhaps it’s time Apple hired some more creative advert makers to spice up the commercials a bit like Verizon does with the Droid ads.

Anyway the latest iPhone 4 advert touts FaceTime, with the same old same “If you don’t have an iPhone, you don’t have FaceTime,” line, something I’m fairly sure everyone on the planet is already aware of.

The iPhone 4 FaceTime advert video is brought to our attention courtesy of the guys over at Daily iPhone Blog and by way of the Apple YouTube page, and delivers the usual allotted run time of 31 seconds for a commercial, and is the same as just about every other iPhone 4 advert you’ve already seen.

The blurb on the video page isn’t that creative either touting, “If you don’t have an iPhone, you don’t have FaceTime, which lets you easily talk face-to-face with another iPhone, a mac, or even an iPad,” again something Apple seems to think we don’t already know although we do.

Considering the iPhone is the most sought after smartphone in the world one would have thought Apple would get their advertising bods to come up with more creative commercials to give said adds a bit more oomph, rather than setting on the same old same wouldn’t you?

Besides, isn’t the iPhone 4 and FaceTime somewhat old news now considering all the web rumours have it that Apple will be delivering the next iOS smartphone in September, namely the iPhone 5, if so hopefully Apple and its advertising people will come up with adverts that are somewhat more enticing than the present ones for the iPhone 4.

Any of our readers have any better ideas on how Apple could be more creative when promoting the features of their iOS devices? If so feel free to voice those suggestions to our comments area below. Anyway if you really want to check out this latest advert for the iPhone 4 you can do so by heading down below, albeit seeing it all before so many times. 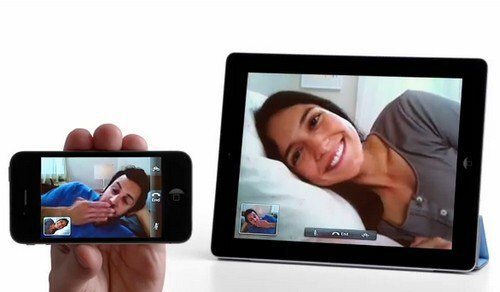