Hmm, it’s been so long since I reported on a Samsung smartphone with the Bada operating system one could have easily thought Sammy’s OS had been killed off, but low and behold it’s still alive and kicking and coming out to play as Bada 2.0 on the new Samsung Wave 725 smartphone.

And the guys over at Unwired View have now come up with some specifications for the Samsung Wave 725 along with a couple of simple renders of the handset, which they presume that the device will probably look like once it comes out to play, courtesy of the guys over at Russian website Badaworld.

As for the rumoured specifications for the Samsung Wave 725, there’s not a lot available really but word is the handset will come packing a 3.65-inch HVGA touch screen with a 5 megapixel rear facing camera along with a VGA front facing camera for those video chats, Bluetooth 3.0, WiFi and Near Field Communication.

Apparently word is when Bada 2.0 is released not only will it deliver that NFC functionality but also bring an improved user interface, security enhancements, multi-tasking, and more, just what that more might be hasn’t been said.

And that’s basically about your lot when it comes to the Samsung Wave 725 with Bada 2.0, there’s no real word on what the smartphone will command price wise but no doubt Sammy will try and make it as attractive as possible, and apparently the device is expected to become available sometime in September, but don’t worry it’s definitely not an iPhone 5 threat.

Apparently the Bada operating system on Samsung devices has done reasonable well in Europe, but isn’t a real presence in the United States, so one wonders just how well a bada device would cope stateside if it were to come up against the likes of iOS and Android which dominate the US market, but then I can’t see Samsung expecting a Bada handset to be any serious challenge to Apple or Android for US market share can you?

Oh, and while I’m at it, do any of our readers actually own a Samsung Bada smartphone? If so feel free to express your opinions on the device and OS to our comments area below. 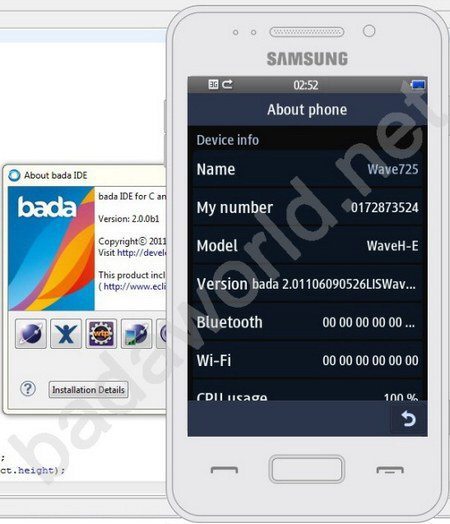