Now I am aware that some will go to any lengths to actually own a piece of Apple gear, that much has been evidenced in the not too distant past with some Chinese youth selling off his kidney just so he could afford an Apple iPad 2, and this was followed by the rather alarming news that a young Chinese girl offered up her virginity as payment for an iPhone 4.

However apparently in China many of these things are out of reach to your everyday Chinese person, but there is an answer to getting a tablet without having to sell off bodily organs or your virginity, as according to the guys over on Geek, some clever Chinese hacker has built his own iPad 3 or version of.

Apparently the guy couldn’t afford a real Apple iPad so set about using old laptop parts and a touch screen to cobble together his version of the iPad 3 albeit the tablet not running iOS but rather Windows XP, and it actually works.

Furthermore, going one step further than Apple, this guy has also made a leather case to house his tablet which also has a built in keyboard so he can use the device just like a laptop.

Obviously the tablet is no match for Apple Gear and is in no way shape or form an iPad 3, but it does show that you don’t have to resort to drastic means to get a tablet, besides there are a few Android tablets that fit the bill nicely out there that are a lot cheaper than the Apple iPad.

Apparently only took 2 weeks for the guys to build the tablet, so perhaps this guy should be working for Foxconn helping deliver Apple gear a bit faster, anyway that’s your lot, all you need do now is head on down and mash that play button to check out the action…enjoy. 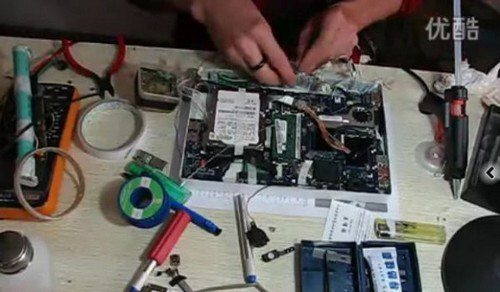